Fishing the ANSA Glenbawn Convention
Back 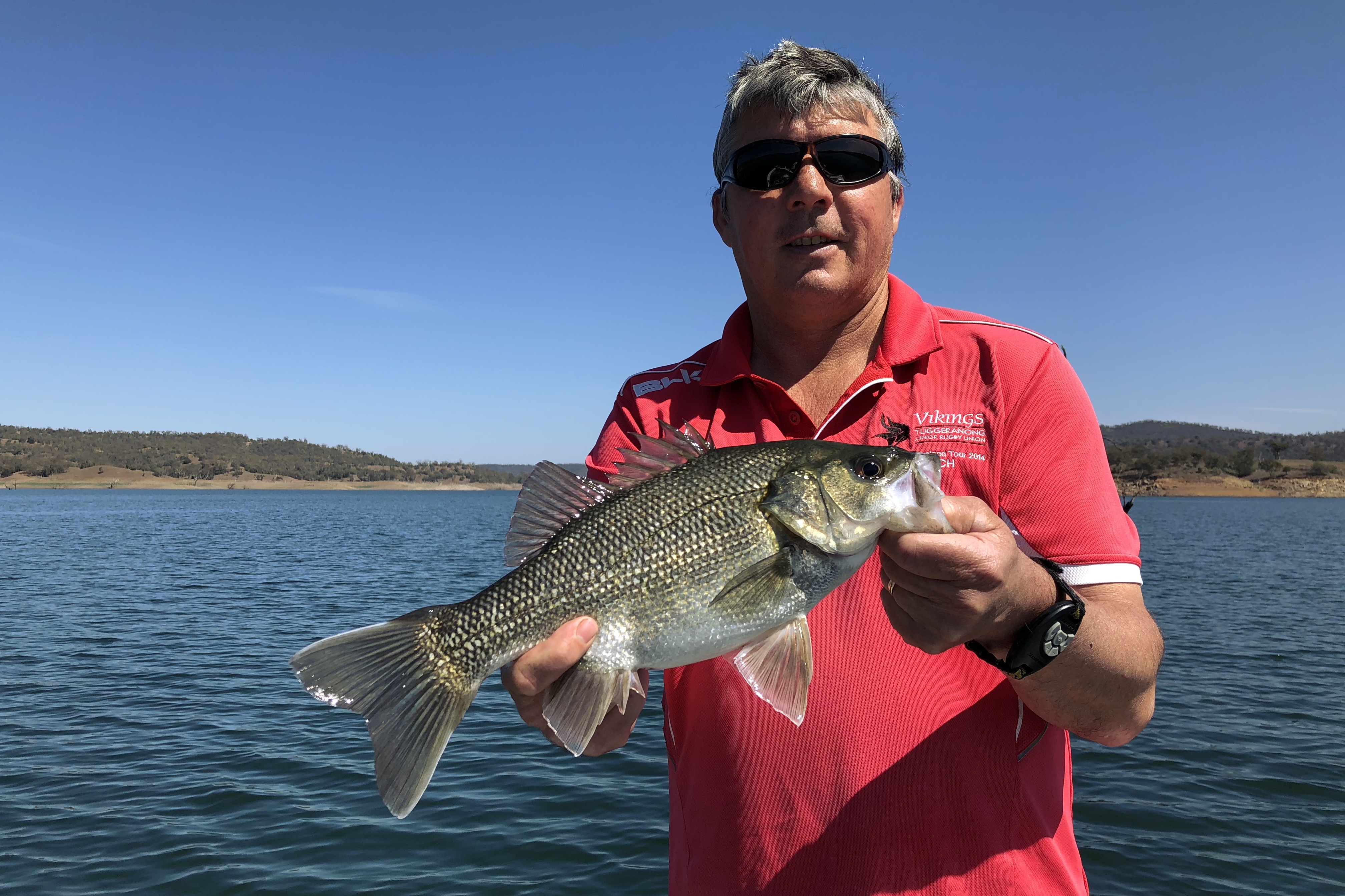 A little over 550 km away from Canberra, off the New England Highway just beyond the hustle and bustle of greater Sydney, lies Glenbawn Dam. It's a long drive but, as I discovered, Glenbawn Dam is truly a wonderful fishing spot with plenty to offer. It is there that, each September since 2002, the Newcastle Sportsfishing Club hosts the very first ANSA Convention of the fishing year.

The Glenbawn Convention is length-based catch and release comp for Australian Bass, Golden Perch, Silver Perch, Eel-tailed Catfish, and European Carp. This year's Convention was held on 14-16 September 2018 and was attended by over 100 anglers from 11 ANSA Clubs.

Fishing a new spot is always daunting so I prepared myself by reading up on the last time our members fished the Glenbawn Convention (see the September 2011 Newsletter), purchased the AFN's fishing map for NSW Central Lakes (AFN Fishing Map 11), and searched the web. However, I was most fortunate to meet Dave Clarke from Canberra, who was staying in the cabin next door. It was also his first visit to Glenbawn and he offered me a spot on his boat.

We launched Dave's boat at the Eastern Foreshore and motored about two thirds up the dam. Dave regularly chases Bass in the Clarence River and nearby dams, so he was pretty confident with picking out some good spots.

The first few spots we tried was among sunken trees about 5-12 metres deep. There, we cast our lures to the trees, let it hit the bottom, and then wind in. Dave commented on how clear the water was – visibility was down to five metres. Our lurecasting session produced no fish, so we decided to troll hard bodies. 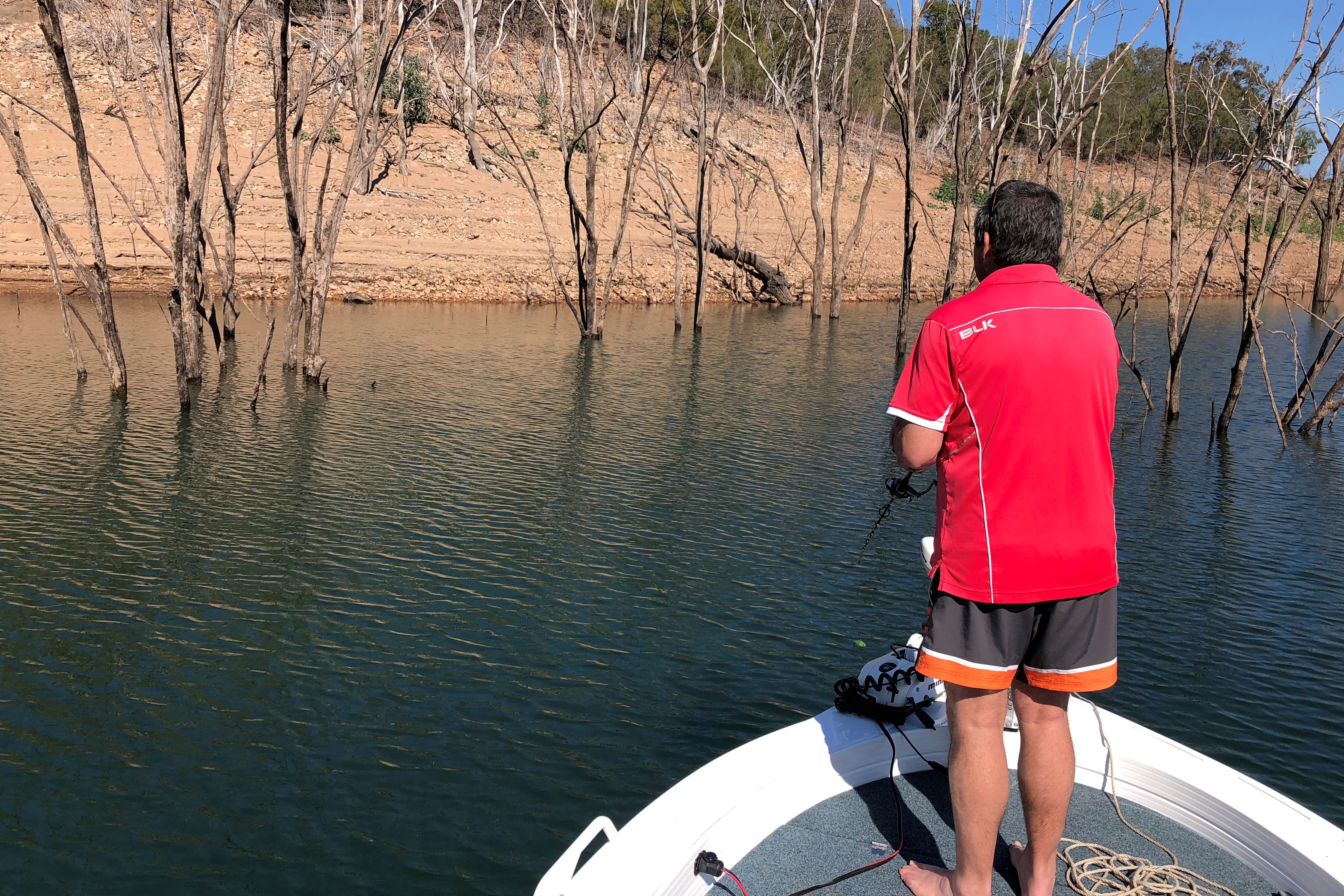 Dave flicking a vibe into the timbers. The water was so clear, with visibility down to five metres.

During our trolling run, Dave spotted a few Pelicans cruising between the banks and a solitary tree sticking out of the water. Dave boldly declared 'where there's Pelicans, there's fish' and proceed to steer the boat towards the tree and Pelicans.

The depth dropped to four metres as we passed between the bank and that solitary tree. As Dave's lure started bouncing the bottom, it got smashed by a Bass. After taking a few photos of Dave and his Bass, we did a few more passes between the tree and the bank. However, it was then time for us to return to the boat ramp.

Back on shore, I decided to drown worms on a secluded bank dotted with sunken trees. By then, the wind had picked up and was blowing directly onto the bank, stirring up the water.

I hooked up on a few Carp, each one aimed for the branches of a tree just off the bank. After losing the fourth fish, I gave the tree some extreme pruning. This might have put the fish off the bite, so I returned back to my cabin with donuts for day 1 of the Convention.

The next morning, I returned to that spot, only the conditions were even windier, with gusts reaching up to 20 knots. The fish did not come on the bite until 11 am and my extreme pruning the day before paid off with a 546 mm Carp.

I later hooked up to an even bigger Carp which busted me off after it found a new tree to aim for. My next capture was a turtle so I decided it was time to retire for lunch.

After lunch, the wind was gusting up to 30 knots. Casting directly among sunken trees was asking for trouble. So I fished a little bay near the boat ramp. This location was still windy, but the bay offered some protection and it appeared to be free of snags.

The new spot paid dividends... almost. Immediately, I was hooking up to some large but unseen Carp. Each hook up with filled me with adrenaline and excitement, quickly followed by frustration as each Carp discovered submerged rocks or tree stumps on which to shred my braid.

As sunset approached, the wind dropped off and so did the bites. I did manage to extract a 460 mm Carp out of the bay. But considering the monsters I had hooked earlier, it felt like I stalked the jungle for a lion and came home with a kitten.

Stan Konstantaras and Joe Garufi hosted a BBQ dinner at the Scone Fishing Club House. Dinner was Lamb Souvlaki and home-made pita bread. It was a very tasty dinner and it was a great opportunity to catch up with familiar faces like Fay and Ron Hanson from Nowra, Chris Stolk from Wollongong, and Barry Mainsbridge and Jenny from Sea Bees Fishing Club as well as making new acquaintances like Eddie Sitarz from Newcastle Sportsfishing Club.

Everyone agreed at the BBQ that fishing was a little tough. Despite the strong winds, some anglers did well, like junior angler Hamish Stolk from Wollongong Sportsfishing Club. He landed some monster Carp and Catfish off the bank. Others travelled upstream of the dam to find Bass in warmer waters.

On the last morning of the Convention, the wind was still blowing but only at 10-15 knots. But it now came with a frosty bite to it. I returned to the little bay near the boat ramp where I had been tormented by monster Carp. Learning from my bitter experience the day before, I switched the braid for heavier mono. And from 7 am, I waited... and waited... and waited.

Finally, the bells went off at 9.35 am. The fish fought differently to the Carp I hooked yesterday, and it turned out to be a 530 mm Catfish. Another Catfish came by at 10.05 am, this time 560 mm. I had another bite at 10.15 am but the hook did not set and I dropped the fish. After that, the fish promptly went off the bite.

However, I spotted a Bass swimming by the bank in front of my feet – I was able to scoop it up with the landing net and get a few selfies. At least I could return home saying I had caught a Bass, albeit not entirely within the spirit of ANSA Rules!

Fishing ended at 11 am and following the raffles, the presentation got underway. Needless to say, none of my fish were winners. Hamish Stolk claimed the trophies for Longest Carp, and Highest Point Scoring Junior Angler. I lost count of the number of trophies claimed by anglers from Outcasts Fishing Club, so it was no surprise that they also claimed the Trophy for Champion Club. They also won Champion Club at the Lake Lyell Convention, and I invited them to attempt a hat trick at Burrinjuck.

Just as the BBQ and presentation finished, the wind died and we had a glass-out on the lake. What a pity I didn't stay an extra night. While this is a lake that favours the boaties, I was encouraged to hear Chris Stolk and his two boys were able to land some nice Bass and Golden Perch off the bank near their campsite (in addition to Hamish's winning Carp).

Finally, congratulations to the Newcastle Sportsfishing Club for hosting a fantastic convention. If I can get the days off work in September next year, I will be back. 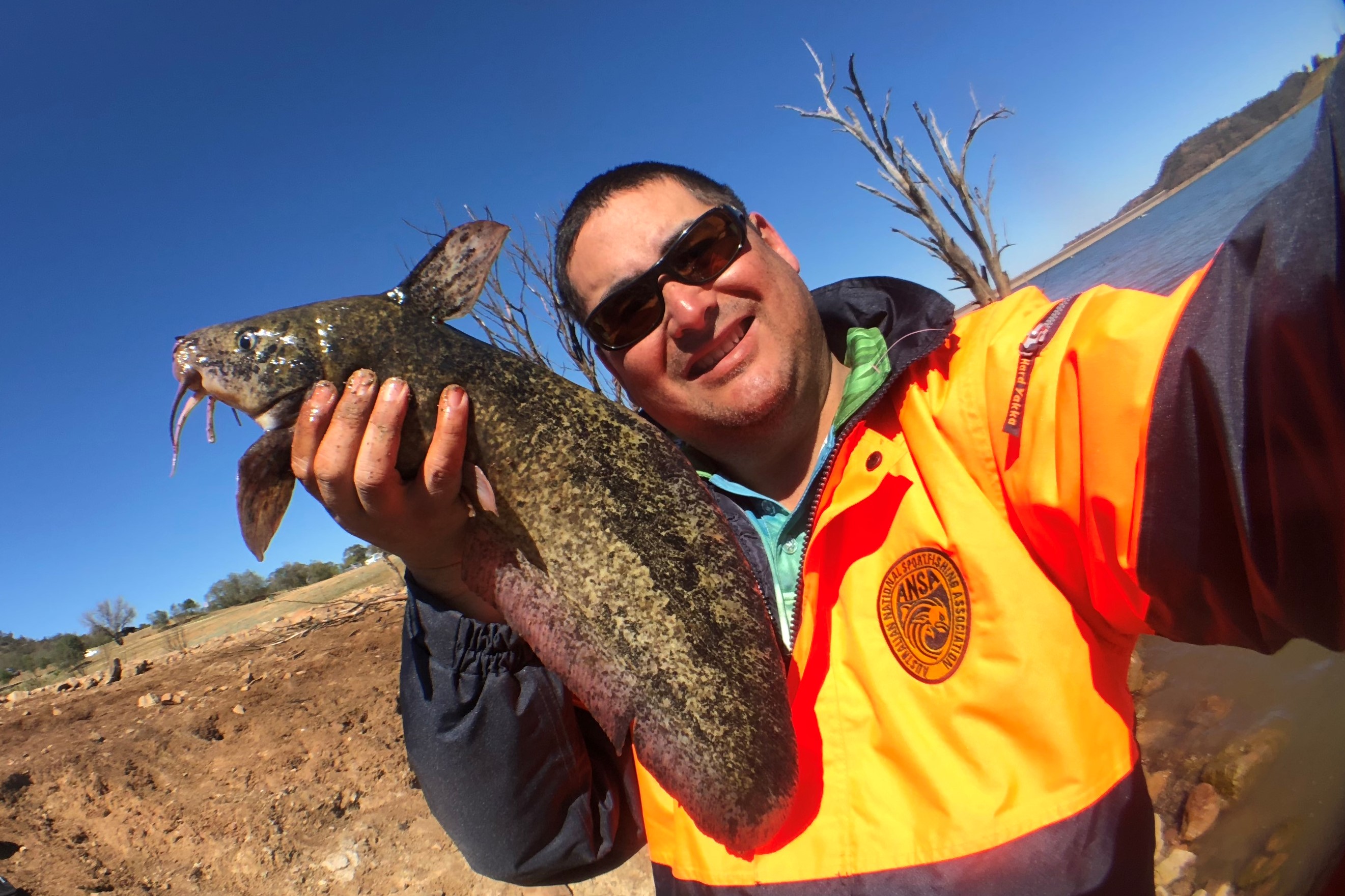 My last fish (and longest) for the Convention – 560 mm Catfish. 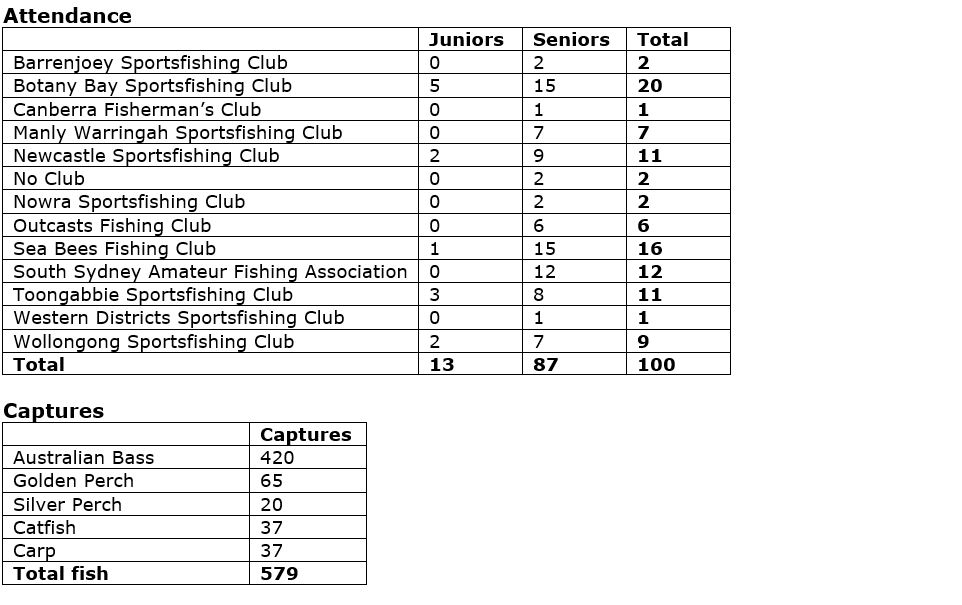